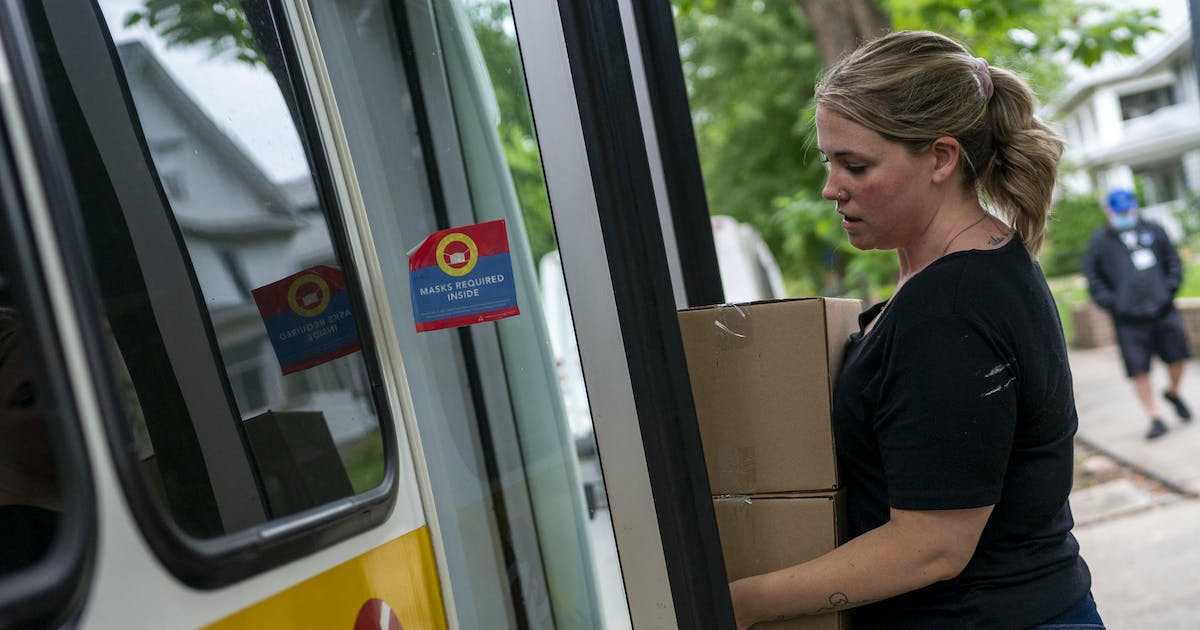 Residents and business owners rattled by a wave of vandalism, stunt driving and gunfire in Uptown Minneapolis hope they can begin reclaiming a sense of peace now that crews have cleared a makeshift memorial garden that some saw as a magnet for criminal activity.

“It’s kinda like liberation day in Uptown,” said Mike Radel, 50, who lives in the neighborhood.

The unrest in one of the metro area’s most popular dining and shopping corridors began after federal authorities shot and killed Winston Smith, a Black man, in a parking ramp last month during an arrest on a weapons violation. The Minnesota Bureau of Criminal Apprehension has said that Smith fired a firearm from inside the car; a friend in the car has said she never saw a gun. The protests intensified after a drunk, unlicensed motorist plowed into cars blocking an Uptown street, killing protester Deona M. Knajdek, 31.

About 30 protesters converged again on the area Friday night, blocking the intersection at 31st Street and Girard Avenue, chanting “all these cops have got to go,” according to video posted on Facebook. Bystander photos show police arresting some of the protesters to clear the intersection.

The surge in Uptown crime and vandalism that has come with some of the protests is testing those who are inclined to side with activists.

“We’re totally all about the Black Lives Matter movement,” said Elga Tinger, who moved to the area with her husband in 2015, “but what they’re doing over there is not really about that — they’re just being destructive.”

For Tinger and her husband, Jake Dhillon, Uptown seemed like a “sleepy” and “easily accessible” urban neighborhood when they moved in. The had lived in cities like Los Angeles, Atlanta and Cap-Haïtien, Haiti. Yet it was in Uptown where she encountered unsettling safety issues like burning dumpsters on her way home from work. Now they are considering another move.

“I thought we would move to Minneapolis and it would be safe,” said Tinger, 45. “This area is just not safe.”

Incidents of violent crime in the neighborhood that includes most of Uptown’s bars and clubs rose to 67 incidents from 49 at this point last year; most of that increase is from a rise in robberies, according to Minneapolis crime statistics. Overall, other categories of crime have remained mostly steady.

Timothy Sexton has lived in the Uptown neighborhood for more than 20 years, and lately has been sleeping in shifts of only a few hours so he can keep watch over his property. When demonstrators set dumpsters on fire, the fumes would seep into his home and aggravate his asthma.

Steve Holst, 74, said his sister who usually lives with him has been too afraid to come back to Uptown since Smith’s death. “Why are the neighbors around here being punished?” Holst said. “We just want a nice quiet neighborhood.”

A new Facebook group devoted to Uptown crime has amassed more than 23,000 followers. The page offers a rolling, albeit sometimes unverified, account of crime and suspicious activity in the neighborhood. Last week, the page drew attention to vandals who roamed through the neighborhood one night, turning over many garbage bins and causing other damage, prompting a new wave of police sirens and helicopters.

Steve Taylor started the Facebook group after the local vandalism and looting in the wake of the police killing of George Floyd. He said he hopes that showcasing criminal activity will draw the attention of city leaders.

Earlier this month, someone posted a letter from Minneapolis City Council Member Lisa Goodman, who was addressing constituents after an incident in which someone leaned out of a spinning car in an Uptown intersection and repeatedly fired a gun into the air.

“This sort of activity is dangerous and completely unacceptable,” she said, adding that she is working with police officials to address enforcement in the area. She said local business groups would be calling on state officials to help tame the “lawlessness that is out of control.”

While new condo buildings continue sprouting above the tree line, the COVID-19 pandemic and looting after Floyd’s murder forced the closure of a series of restaurants and businesses. Uptown lost its Apple Store last year, creating a noticeable hole. In the past two years, other big brands to exit include Columbia Sportswear, The North Face and Victoria’s Secret. Apple was already in discussions to close the store before the pandemic.

At the same time, the Uptown neighborhood remains a place where people live, work and shop. Apartment dwellers walk their dogs, skateboarders navigate the sidewalks and bus riders make their way across intersections as residents walk home holding bags of groceries.

Many neighbors and business owners said they hope the removal of the memorial garden marks a turning point. Before the removal, the Uptown Association canceled its 57th annual Uptown Art Fair due to safety concerns, and Juut Salon Spa closed its location at Hennepin Avenue and Lake Street after 35 years.

Juut owner David Wagner explained the decision in a Facebook post, writing, “This past year has been difficult on our business, with closing for COVID and with the devastating killings by police of George Floyd and most recently Winston Smith a block away from our salon.”

Doug Huemoeller, owner of Kitchen Window on Hennepin Avenue, said businesses are “frustrated and fed up.” Huemoeller said criminals feel emboldened to vandalize storefronts and bus stops and shut down traffic without fear of consequence.

The cooking supply store has been in the Uptown area for more than 35 years. But a year of pandemic closures, civil unrest, and an increase in crime — real or perceived — could have lasting consequences.

“It’s a ripple effect,” Huemoeller said. “People move in and around Uptown because of all the services and amenities and businesses that are there. If those businesses start leaving, that whole energy and livelihood that people are renting from or buying into is gone. It starts to create a huge hole.”

Jonathan Weinhagen, Minneapolis Regional Chamber president and chief executive, said better policing is at the top of the list for business owners.

“[Uptown] is a part of who we are as a community,” Weinhagen said. “That’s one of the things we hear loud and clear, even in the midst of a bit of despair with regards to business owners, is a pure commitment and resolve to bring Uptown back to where it was and to not allow it to further degrade.”

Serial restaurateur Kim Bartmann owns two restaurants in Uptown, Barbette and Trapeze, both on W. Lake Street. Over 30 years, she has witnessed Uptown withstand violence, demonstrations and other events, which gives her optimism.

Bartmann would like to see a greater variety of small businesses in Uptown, “not just bars and clubs,” she said. “It needs a mix, and only a mix creates a vibrant business node.”

City Council President Lisa Bender said the dominance of big-name stores on Hennepin Avenue made the area far less resilient during the pandemic than the parallel Lyndale Avenue, about eight blocks east. When Uptown lost major retailers, it also lost its out-of-area customers. That left the streets emptier during the day and contributed to the sense that they were less safe, she said. Lyndale Avenue is home to more locally owned businesses, which she said weathered the pandemic and continue to attract people.

“When there’s more activity, when there are more people out and doing lots of different things during the day and in the evening time, it feels safer,” Bender said. “I really think it would feel a lot more lively and resilient if we really focused on supporting more local uses there, more community-serving uses.”

Until then, some businesses are hanging on in hopes of better times to come.

“Our business is dead at night,” said Frank Chase of Andy’s Diner, which opened in January 2020 and managed to weather the pandemic and civil unrest last summer. “That’s because people fear coming to Uptown.” When anyone asks him whether the area is safe, Chase tells them yes, of course it’s safe, and that he needs more people to return in order to make it safer.

“Lake Street in Uptown is open for business!” Chase said. “Come back.”

You have limit - count - 1 articles left